A Cut Above the Rest

It has been two years since Time magazine voted male circumcision for HIV prevention the top medical breakthrough of the year. This followed results from three clinical trials in Kenya, Uganda, and South Africa, which showed that circumcised men are approximately 60% less likely to acquire HIV from heterosexual sex (see Cutting HIV Transmission, IAVI Report, July-Aug. 2005). Since then, this intervention has slowly started to become an integral part of HIV prevention efforts in several African countries severely affected by HIV.

In Swaziland, a tiny African kingdom known for having the highest adult HIV prevalence in the world (26.2%), male circumcision services are being scaled up in an effort to help curb the country’s epidemic. Currently, the country’s circumcision rate is quite low, with only 8% of adult men having already undergone the surgical procedure. Population Services International (PSI), a nonprofit organization with an office in Swaziland, recently opened a new men’s clinic called Litsemba Letfu, which means “our hope” in siSwati, the local Swazi language. This men’s clinic is situated between Mbabane and Manzini, the commercial center of the country, and is designed to meet some of the country’s demand for circumcision services.

Several studies based on statistical modeling indicate that sustained roll-out of male circumcision could have a substantial impact on the HIV epidemic in countries, like Swaziland, that have high HIV prevalence and low circumcision prevalence. The World Health Organization has identified 13 priority countries where male circumcision could have the most significant impact in averting new HIV infections (see Table 1, below). Mathematical models have shown that if Swaziland could circumcise 50% of males aged 15-49 by the end of 2020, one HIV infection could be averted for every four circumcisions performed. 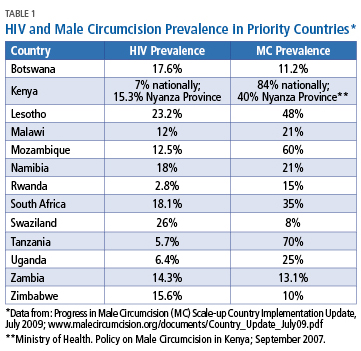 But the plans for Swaziland are even more ambitious. “The goal is to circumcise 80% of men and adolescent young men in Swaziland in five years,” or slightly more than 100,000 males, says Jessica Greene, technical services director of PSI-Swaziland, whose work is supported by the US President’s Emergency Plan for AIDS Relief (PEPFAR) and the Bill & Melinda Gates Foundation. And based on several studies among adult Swazi men, it seems that the surgical procedure should be widely accepted. “There have been a number of surveys done in Swaziland indicating that the intention to circumcise is generally 60-80%,” adds Greene.

Even more ambitious than Swaziland’s circumcision campaign is one that recently was initiated in Kenya. The Kenyan government, with the support of PEPFAR and the Gates Foundation, has already implemented programs that have circumcised approximately 50,000 males to date. Starting in November 2009, the country has also embarked on an aggressive campaign to circumcise 30,000 additional men in seven weeks in Nyanza Province. Nyanza has nearly half of the country’s 1.2 million uncircumcised men, and its HIV prevalence is more than double the national average. With the support of the Prime Minister, this campaign is utilizing mobile clinics to provide circumcision services. At this time, there are approximately 1,200 men undergoing male circumcision daily.

Other countries, like Botswana, have also recently begun promoting male circumcision as an HIV prevention strategy. The country plans to conduct almost 500,000 male circumcisions in the next five years, which would raise the circumcision prevalence from its current level of 11% to 80%. Public health campaigns emphasizing the benefits of circumcision have utilized soccer themes to draw on some of the excitement surrounding next year’s World Cup, which is the first to take place on African soil.

Meanwhile, research on adult male circumcision is still ongoing. Researchers are currently exploring the potential HIV prevention benefits circumcision may afford in men who have sex with men, as well as innovative surgical techniques that improve the efficiency of the procedure, lower complication rates, and reduce post-operative healing time. Hankins describes the overall global progress as “slow but steady,” though she says the progress is “never as fast as you’d want it to be.”

Jonathan Grund is a contributing writer based in Atlanta, Georgia.