Despite its troubled past, gene therapy finds some traction in HIV prevention research

Gene therapy has waxed and waned in popularity among researchers since it was conceptualized by scientists four decades ago in a paper in Science. It is currently in a waxing phase, especially in HIV research circles, where it is mainly being evaluated as a therapeutic strategy. But the technology has also found a few fans in the ranks of HIV prevention researchers.

Gene therapy, as the name suggests, is the use and manipulation of genes to treat or prevent disease. Some studies involve replacing a dysfunctional gene with a healthy copy of that gene. Others “knock out” a mutated gene that is functioning improperly, or introduce a new gene into the body to help fight disease. Researchers typically use weakened viruses grown in laboratories to manipulate the chromosomal DNA of cells or shuttle new genes into their nuclei.

Only a few gene therapies have so far been commercialized. In a first for the Western Hemisphere, European regulators granted Dutch biotech uniQure approval to sell a product named Glybera for the treatment of lipoprotein lipase deficiency (LPLD). This rare genetic defect leaves people unable to properly digest fats, causing recurring acute pancreatitis. Glybera delivers a good copy of the lipoprotein lipase (LPL) gene in a viral vector through a one-time series of intramuscular injections in the leg, so that the cells that take up the gene can make the functional protein.

But it isn’t the first licensed gene therapy. In 2004, Chinese regulators gave the nod to a therapy named Gendicine for the treatment of certain head and neck cancers. Manufactured by Shenzhen SiBiono GeneTech, this product inserts a healthy gene for protein 53 (p53)—a tumor suppressor—into human tissue, so that patients begin making functional p53, not just the mutant variety that some studies have linked to cancer susceptibility.

Nonetheless, given its novelty, gene therapy is still considered highly risky, and regulators have set the bar high for proof that such therapies are safe and effective. So it is currently only being evaluated for the treatment of incurable and potentially lethal conditions, and remains largely experimental over much of the world.

When researchers first began attempting gene therapy in the 1980s and 1990s, it was often hyped by media as the Next Big Thing in medicine. But it became highly controversial after an 18-year-old named Jesse Gelsinger, who suffered from a genetic liver disease, died in 1999 during a gene therapy trial at the University of Pennsylvania (UPENN). The cause of death was attributed to the viral vector—a modified adenovirus (Ad)—that was used to deliver the gene he lacked. The virus is widespread in humans and generally harmless, but in Gelsinger it seems to have induced a fatal immune system overreaction. Gelsinger’s death triggered government investigations, lawsuits and much public outcry. The lead investigator of the trial, James Wilson, was barred from leading any trials regulated by the US Food and Drug Administration for five years, but has since rebuilt his career as a researcher.

Technologies have since evolved sufficiently to make the strategy a viable alternative for treating a growing number of diseases. Advances in both the vectors used to carry the genes and the techniques used to deliver them have enabled studies on treatments for everything from hereditary blindness to hemophilia to HIV infection. Meanwhile, HIV has itself become a tool for gene therapy.

Most recently, a team of researchers at UPENN reported using a disabled form of the virus to reprogram the immune system of a six-year-old leukemia patient, a strategy that is being explored at several other hospitals as well. Doctors first removed millions of the girl’s T cells, and then used a disabled HIV virus to insert new genes into the T cells to teach them to target the cancer. Doctors then administered the altered T cells intravenously. Bruce Levine, one of the researchers involved in that trial, said the strategy is akin to turning T cells into heat-seeking missiles. “There were a lot of people here in tears when we heard she was recovering and discharged from the ICU,” said Levine, director of the Clinical Cell and Vaccine Production Facility at UPENN, who was involved in the gene therapy study. The girl is now in remission.

Gene therapy is also finding novel applications in the prevention of HIV. Vaccine approaches to prevention have failed to induce broadly protective immune responses against HIV. This is because the virus is highly variable, and has evolved several strategies to evade both antibodies and the cellular components of the immune system, which are essential to vaccine-induced immunity. Scientists have thus sought to supplement the immune system’s capabilities by directly delivering into the body antibodies known to disable a wide variety of HIV variants.

Researchers have observed that when such antibodies are infused into people infected with HIV, they temporarily suppress viral load even in the absence of antiretroviral therapy. This suggests that the injection of sufficiently large doses of such antibodies—known as passive immunization—might provide a measure of protection from HIV infection. Any such effort to generally immunize people against HIV would, however, be prohibitively expensive—though some funders are currently interested in studying the approach to establish proof of concept for the strategy. Researchers are therefore considering gene therapy as a means of “manufacturing” such antibodies in people.

Philip Johnson, a professor of pediatrics at The Children’s Hospital of Philadelphia, pioneered this gene transfer approach. About a decade ago, he used a recombinant adeno-associated virus (AAV) vector to transfer a gene for b12, one of the first known broadly neutralizing antibodies (bNAbs) against HIV, into mouse muscle cells. AAV vectors were chosen because they persistently express foreign genes and, in fact, the mice expressed the b12 antibody up to six months after a single injection of the AAV vector. The approach was not, however, tested in humans.

In 2009, Johnson published results of a seminal study that used an AAV vector engineered to contain genes encoding a kind of designer antibody constructed from fragments of antibodies. The antibody-like molecules were able to bind the Envelope protein on the surface of a simian immunodeficiency virus (SIV), the monkey form of HIV. They were specifically constructed to inhibit a strain of SIV known as SIVmac316. Monkeys given AAV vectors carrying the designer antibodies resisted SIVmac316 infection, while the control group of animals acquired SIV after subsequent viral challenge.

Since then, Johnson’s lab has incorporated a full length bNAb known as P 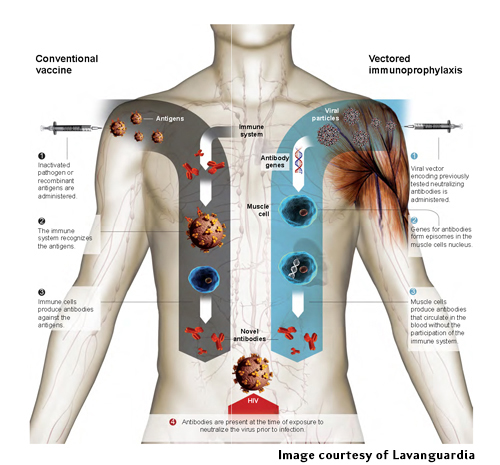 G9 into an AAV vector to assess its potential as a means of preventing HIV. His team is now getting set to launch a Phase 1 trial in collaboration with IAVI—which helped isolate the antibody—to test the safety and feasibility of the vector. Nobel Laureate David Baltimore’s lab at California Institute of Technology is, meanwhile, pursuing a strategy similar to Johnson’s, but is using a different AAV vector and a different set of bNAbs. In both cases, the antibodies are ultimately meant to be expressed and secreted by muscle cells. Baltimore’s lab has dubbed this strategy vectored immunoprophylaxis, or VIP (see image).

Alejandro Balazs, a postdoctoral researcher in Baltimore’s lab, said their team had initially pursued a different gene therapy approach—inserting genes into the stem cells of blood to try and create a population of B cells that would produce naturally occurring antibodies. But the amount of antibody produced was, he says, “too low to be prophylactic in a systematic way.” About six years ago the team turned its attention to VIP, and recently evaluated the gene transfer strategy in humanized mice. In late 2011, it reported that two of the antibodies tested protected the humanized mice against doses of HIV higher than what would be transmitted during sex (see VAX Nov. 2012 Spotlight article, Of Mice and Men).

The lab intends to partner with the US National Institute of Allergy and Infectious Diseases to evaluate VIP in a Phase 1 trial, although it hasn’t settled on which antibody to use in the AAV vector, says Balazs. Unlike Johnson’s group, Baltimore’s will likely test the gene therapy in HIV-infected individuals first. “We think it might be easier [from a regulatory standpoint] if we go into HIV-infected patients on therapy first, and we think we can make an argument as to why that would be beneficial,” says Balazs.

Of course, using AAV vectors to transfer genes is not without its own set of challenges. Gene therapy research for other diseases, such as hemophilia, found some AAV vectors elicit CD8+ T-cell responses that target the virus for elimination. Moreover, not all strains of AAV have enough affinity for certain tissues, which can prevent therapeutic genes from reaching their cellular manufacturing centers. And while more than 120 new AAVs have been discovered over the past decade—many by none other than Wilson—not all of these vectors are good transporters of genes.

Researchers have also had a hard time designing vectors and genes that can express enough of the desired protein in cells in order to trigger a sufficiently potent immune response against a pathogen. Researchers at the UPENN Perelman School of Medicine’s Gene Therapy Program have overcome some of these difficulties by selecting AAV vectors with specific affinity to tissues where the genes are meant to be delivered.

They are also exploring methods of optimizing genes themselves to boost their expression (see image). The gene therapy program at UPENN recently formed a collaboration with the California company DNA2.0 to evaluate the use of the company’s GeneGPS technology to optimize genes that encode bNAbs from The Rockefeller University scientist Michel Nussenzweig’s laboratory.

The genetic code is read in triplets called codons, and 61 codons represent the 20 amino acids that make up all proteins. More than one codon, in other words, codes for a given amino acid. But not all codons are created equal: different organisms, and perhaps different tissues, prefer certain codons over others and more readily read them to make protein chains. Researchers have generally tried to harness such quirks by selecting the most common codons for genes they wish to transfer. “But people have come to realize that these assumptions are really hit or miss, and not optimal at all,” said Mark Welch, the director of gene design at DNA2.0. “The question is: What is optimal?”

The method developed by DNA2.0 takes a more systematic, experimental and computational approach to try to determine which codons work best. “We want to be able to get enough [antibody] produced in the tissue so you have a good enough response,” said Welch. The technology has been validated in other research venues, but this is the first time it is being used in this way for HIV prevention.

Wilson, a professor of pathology and medicine who leads the Gene Therapy Program at UPENN, said that while it has become much easier to synthesize genes, getting them to work in vectors is not so easy. Success in gene optimization, he guesses, will improve the efficiency and cost-effectiveness of developing vectors for gene therapy. The work is being funded by a grant from The Collaboration for AIDS Vaccine Discovery of the Bill & Melinda Gates Foundation.

“We have the capacity to very quickly take different versions of a gene and get them in a delivery vehicle and inject them into mice,” said Wilson. “Coupling that with a group that is thinking about developing algorithms seems pretty complementary. A lot of people can sit at computers, but at some point you need someone to synthesize the vectors and test them in animals.” Or better yet, in humans.