Test and Treat on Trial

Millions of lives have been saved by highly active antiretroviral therapy (HAART)—the combination of antiretrovirals (ARVs) for the treatment of HIV infection. But with an estimated 7,400 new infections still occurring every day, effective strategies for preventing the spread of HIV are still sorely needed. “With no vaccine or microbicide on the horizon, we need to look at other approaches,” said Sarah Fidler of Imperial College, in a talk at the 5th International AIDS Society (IAS) Conference on HIV Pathogenesis, Treatment and Prevention, which was held July 19-22 in Cape Town, South Africa.

One strategy, which received considerable attention at the IAS conference, is known as test and treat. This approach calls for universal HIV testing and immediate treatment of all HIV-infected individuals. Current guidelines for initiating treatment vary by country and circumstance, but the World Health Organization (WHO) recommends treatment begin when a  person develops AIDS (defined as having fewer than 200 CD4+ T cells in a microliter of blood) or an AIDS-related illness. The basic assumption of test and treat is that people taking ARVs adherently will have lower viral loads—the quantity of virus that is circulating in their bodies. And since studies have shown that viral load is the chief predictor of the risk of heterosexual HIV transmission, individuals on ARVs with reduced viral loads should be less likely to transmit HIV to others. Therefore, getting more HIV-infected people on treatment as early as possible could also theoretically reduce the spread of HIV. 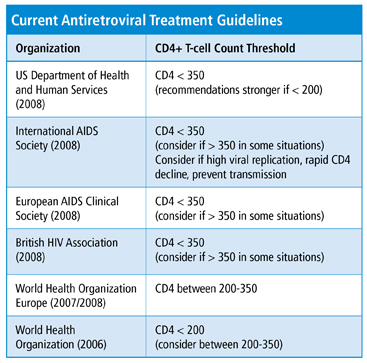 IAS President Julio Montaner says researchers have been confident for several years that ARVs, if appropriately employed, provide a dual benefit. “Number one, they decrease morbidity and mortality rates among HIV-infected [individuals],” he says. “In addition, adequately treated people become at the very least less likely to transmit HIV. So if you treat a larger number of people, the impact on the epidemic could be significant.” Mathematical models suggest that the test and treat strategy could possibly even eliminate HIV in 50 years.

But Anthony Fauci, director of the US National Institute of Allergy and Infectious Diseases (NIAID), cautions that this approach “may not work.” Speaking at the IAS conference, Fauci said, “We need to address that before we can promote it.” NIAID and others are now studying the feasibility of test and treat, including how much of an effect ARVs have on reducing HIV transmission and the feasibility of implementing universal HIV testing. “We need to determine these things factually or we’ll be in trouble,” says Myron Cohen, director of the Institute for Global Health and Infectious Diseases at the University of North Carolina, who is also studying test and treat.

Even if shown to work, there are numerous logistical and financial obstacles to implementing this strategy. Based on the current treatment guidelines, only about a third of people who need therapy are now receiving it. Treating all people who are currently HIV infected, regardless of their disease status, would dramatically increase the number of people who qualify for ARVs, adding substantially to treatment costs. “Why are you even thinking of test and treat if you can’t even get all infected people [who need treatment now] on antiretroviral therapy?” Fauci asked at the IAS conference. He answered his own question by saying these are complementary issues that need to be addressed at the same time.

The mathematical model that sparked much of the current discussion regarding the viability of test and treat was developed by a quintet of researchers from the WHO, and was published in the medical journal The Lancet in January. The authors of the study used South Africa to model a generalized HIV epidemic and predicted that by testing all adolescents and adults at least 15 years of age every year and providing ARVs immediately to those who are found to be infected, HIV incidence would drop from slightly more than 1% a year to .05% a year, effectively ending the epidemic within 50 years. The authors suggested that the epidemic would end because no new infections would occur and those already HIV infected would eventually die.

Several assumptions were programmed into the model, including that all HIV transmission was heterosexual, that 95% of the population receiving ARVs was compliant to therapy, and that access to different drugs would be available for individuals whose first HAART regimen failed to control the virus. In many countries, availability of second-line drug regimens is limited and often prohibitively expensive. The model was also based on the assumption that the period of acute or primary infection, which occurs soon after HIV infection and is when viral load is highest, only lasts about two months, and contributes to only 10% of HIV transmissions. However, the stage of acute infection is when the risk of HIV transmission is thought to be highest.

“Their assumptions about the effect of this strategy are highly optimistic,” wrote David Wilson, an AIDS researcher at the University of New South Wales in Sydney, in a commentary published three months later in The Lancet. “They assume that ARV therapy reduces infectiousness by 99%,” Wilson wrote. “This level of reduction is unlikely.”

Brian Williams, the WHO researcher who created the mathematical model and is now with the South African Centre for Epidemiological Modeling and Analysis, says the volume of emails and press coverage that The Lancet study generated exceeded anything he had experienced before. Many researchers have raised questions about this model. The WHO researchers acknowledge that better data on test and treat is needed, and they hope studies are done to determine if the approach is feasible. “The real obstacles are political not scientific,” says Williams. “If you don’t have the political will it won’t work.” The WHO is convening a meeting this fall to discuss test and treat.

Meanwhile, several researchers are already at work on determining the feasibility of this strategy. NIAID, along with the US Centers for Disease Control and Prevention (CDC), is developing and sponsoring pilot studies that address the feasibility of universal HIV testing and explore which voluntary counseling and testing strategies work best in specific high-risk populations. Since risk of HIV transmission is high during the acute stage of HIV infection, testing strategies would need to target individuals at greatest risk of HIV infection and provide them with ARVs very soon after they become infected. But getting high-risk individuals to undergo routine testing has proven difficult, even in countries where treatment is accessible and routine testing is recommended. A recent CDC analysis of 34 US states found 38% of individuals progressed to AIDS within a year after their HIV diagnosis, underscoring the failure to identify HIV-infected individuals soon after they became infected.

Scientists will also have to measure how effective ARVs are in actually preventing transmission. While scientists widely believe ARVs, by suppressing viral load, can help reduce HIV transmission, this has not been shown clinically. “I love mathematical modeling,” says Cohen, “but the model in question is driven by assumptions that if we test everybody, treat everybody, and the therapy works well, it will prevent transmission. It’s a far cry from having absolute veracity.”

Cohen is leading a trial in Africa, Asia, and Latin America that is looking at whether earlier initiation of ARVs reduces the risk of heterosexual HIV transmission. The study will compare HIV transmission rates among serodiscordant couples (in which one partner is HIV infected and the other is not) based on whether the HIV-infected partner starts ARV therapy early or starts taking ARVs only when their CD4+ T cell count drops to between 200 and 250. Plans are to enroll 1,750 couples in the seven-year study.

At the IAS conference, much attention was focused on the sustainability of global HIV treatment programs given the current economic crisis. The Joint United Nations Programme on HIV/AIDS (UNAIDS) and the World Bank reported in July that some international treatment programs are facing drug shortages, resulting in interruptions in treatment for some individuals, because the global recession prompted some public and private donors to reduce their funding. This has some researchers wondering where additional money for implementing test and treat would come from. “The proponents of this [test and treat] strategy are not being realistic and could do a lot of harm to treatment programs if there is a competition for resources,” says Ron Gray, a professor of population and family planning at the Johns Hopkins Center for Global Health.

UNAIDS estimates that US$25 billion will be required to achieve universal access to HIV treatment, prevention, care, and support in low- and middle-income countries by 2010, including $7 billion for provision of treatment, based on the current treatment guidelines. In 2008, $14 billion was available for HIV programs.

The WHO researchers suggest that although implementing test and treat would require substantially more money in the short term, over time the financial burden would be alleviated as the number of new infections declined.