Along with traditional outlets like billboards, newspaper and radio advertisements, printed handouts, and social events, many clinical research centers are now also tapping into social media with relish to try to generate interest among potential volunteers for AIDS vaccine clinical trials.

Since its launch last summer, approximately 250 of the planned 1,350 volunteers have been enrolled in HVTN 505, a Phase II trial that is being conducted by the HIV Vaccine Trials Network (HVTN) at 15 sites in 12 US cities. With the pace of enrollment slower than investigators would like, several of the sites have turned to social media and online classifieds to try and draw volunteers to the study.

Although it does not recruit volunteers for the individual trial sites, HVTN’s headquarters has been posting information about HVTN 505 on its Facebook page and posting advertisements on the Facebook pages of individuals whose demographics seem to fit the requirements for enrollment. Trial sites are also using social media to reach potential volunteers in their regions. A trial site in San Francisco recently posted a video (available at www.SFisReady.org) of nine volunteers who had participated in previous vaccine trials talking about what it was like to participate and addressing some of the misconceptions regarding AIDS vaccine candidates.

Jennifer Sarche, director of community programs for the HIV Research Section of the San Francisco Department of Public Health, says viewers can easily share the video with friends on Facebook or MySpace.

Sarche views the use of social media strategies as part of a larger goal of community education. “We believe the Internet is a place for people to learn more about vaccines at their own pace,” she says. “Then, if a person has seen that their friend is one of our sites’ fans, and has watched our videos, and read more about it, they’ll be a person who is more likely to stop and talk when they see one of our recruiters on the street. Half of our enrolled participants have come from that active street outreach.”

A little help from your friends

For HVTN 505, investigators are seeking to enroll HIV-uninfected men who have sex with men (MSM) or transgendered women who have sex with men. The trial is testing the safety and efficacy of a combination of two AIDS vaccine candidates that are administered sequentially in a prime-boost regimen. Volunteers first receive three vaccinations with a DNA-based candidate that contains non-infectious HIV fragments or immunogens, followed by a second vaccine candidate that employs an inactivated strain of the common cold virus, known as adenovirus serotype 5 (Ad5), to ferry HIV immunogens into the body to provoke an immune response against HIV. Neither vaccine candidate can cause HIV infection.

Participation in HVTN 505 is also limited to volunteers who do not have pre-existing immunity to the naturally circulating Ad5 virus because the results of the STEP trial, which involved a different Ad5-based candidate, suggested that male volunteers who received the vaccine had a higher risk of acquiring HIV if they were uncircumcised and had pre-existing antibodies against the Ad5 vector, as compared to placebo recipients with the same characteristics.

In fact, the STEP trial results may be part of the reason enrollment in HVTN 505 has been slow. Cheryl 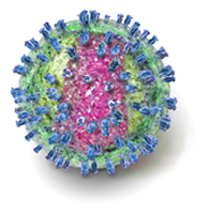 Stumbo, a communications specialist at HVTN’s headquarters in Seattle, says that some trial sites are still confronting a skeptical public that is unsure whether the vaccine candidate could actually work given that the Ad5 candidate tested in the STEP trial was not effective.

Stumbo says other factors are also to blame for the sluggish pace of enrollment in HVTN 505, including the economic recession, which she said has “put some people in bad moods,” and may be delaying them from doing something altruistic, like joining a vaccine trial.

It’s not clear how much of an impact the use of social media will ultimately have on enrollment for HVTN 505. Peggy Johnston, director of the Vaccine Research Program in the National Institute of Allergy and Infectious Diseases’ Division of AIDS, which developed the two vaccine candidates being tested in the HVTN 505 trial, says while no “immutable deadline” has been set, the goal is to complete the trial within four and a half years after enrollment of the first volunteer. Johnston says the shelf life of the vaccine is not usually a factor in determining trial futility.

“Unless trial length is predicted to be so long that the total cost becomes fiscally indefensible, or if results from other trials become available and make HVTN 505 irrelevant, NIAID remains committed to the completion of HVTN 505,” says Johnston.

Other efforts at using social media to boost enrollment involve online classifieds and blogs. After obtaining approval from the trial’s Institutional Review Board, the Fenway Institute (formerly Fenway Community Health) in Boston posted a listing on two separate craigslist pages seeking volunteers for HVTN 505. In addition, a Fenway recruiter combs craigslist’s personal ads looking for people who appear to fit the eligibility requirements for the trial and then contacts the individuals to ask if they would consider participating in the study. Coco Alinsug, Fenway Institute’s recruitment coordinator, says the site has screened about 90 MSM for the HVTN 505 trial, and enrolled about 17 of them, most of whom were found through their online efforts.

Some individuals, moved by a desire to support AIDS vaccine research, have taken social media into their own hands by creating personal blogs that encourage others to volunteer for a clinical trial. Three months ago, Memphis resident Andrew Prislovsky began blogging on his website, the Accidental Activist, about his experiences as a volunteer in a vaccine trial known as HVTN 080. The Phase I trial, launched in November 2009, involves 48 volunteers and is designed to assess the safety of and immune responses induced by a DNA-based vaccine candidate.

Prislovsky says his sister’s difficult, but ultimately successful, battle with breast cancer moved him to join a trial, but it was World AIDS Day that propelled him to get involved specifically with HIV/AIDS. After he enrolled in HVTN 080, Prislovsky learned from the director of the Nashville trial site about its struggles to find volunteers for some of its AIDS vaccine studies. That’s when he decided to blog about his experiences. “My whole point is that the average person can do something,” says Prislovsky. “I’m just a cog in the wheel, but 30 years from now it might make a difference.”