An Interview with Michel Sidibé

The executive director of UNAIDS talks about AIDS funding, his hope for a vaccine and a cure, and a sustainable approach to treatment 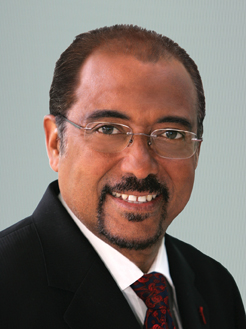 Nations Programme on HIV/AIDS (UNAIDS), an agency that was established in 1994 to lead a coordinated global response to the AIDS pandemic. Sidibé holds a dual appointment as Under-Secretary General of the United Nations (UN) and is only the second person to lead UNAIDS—Peter Piot, who is now director of the London School of Hygiene and Tropical Medicine, was the first. Since his appointment, Sidibé has laid out an ambitious agenda that includes eliminating mother-to-child transmission of HIV and halving the number of tuberculosis-related deaths among HIV- infected individuals by 2015.

Recently, he called for the creation of a UN high-level commission on HIV prevention and a collaborative effort among scientists, AIDS advocates, countries, and drug manufacturers to find a comprehensive and sustainable approach to administering antiretrovirals in developing countries, an effort named Treatment 2.0.

Sidibé’s three decades of experience in international public health and development include 23 years of service with the UN, the last nine with UNAIDS. Sidibé was born in 1952, is a citizen of the West African country of Mali, and hopes his World Cup soccer favorite, Ghana, advances to the finals.

What do you see as some of the most important aspects of HIV prevention?

First off, we have 1.2 billion young people who need sexual education and who need to be educated about HIV prevention. That is certainly one objective. The second objective, from my point of view, is to make sure that we continue to push for a cure for HIV and a vaccine. If we drop this from the agenda we will regret it because we need a mechanism to help us reduce the long-term costs of AIDS. The best way to accomplish this, in the long run, is to find a vaccine or a cure. In the meantime, we are facing a major challenge in treatment. We have around five million people on treatment and 10 million people waiting for treatment and there is a very important role for treatment in supporting prevention.

How would you characterize the long-term funding forecast for HIV programs?

We are moving from a period of opportunity to an era of scarcity that is characterized by many crises, particularly the global financial crisis. Despite the global financial crisis, this is not the time to scale back. We have been making progress. We need to fully fund AIDS research and continue to scale up the programs we have today. But we need to make sure that as we mobilize resources we become smarter, that we make the money work better, that we make the programs more cost-effective, and we must try to bring more integration to health systems. I think that is critical. For example, we know that there are more than 800,000 maternal deaths linked to HIV, so we definitely need to look at ways to integrate HIV services into maternal health programs.

So are you in favor of more integrative approaches to funding global health? 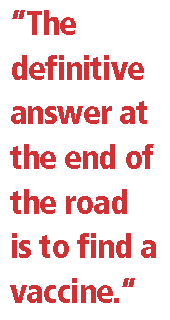 Integrating HIV services is the only way we are going to be able to provide comprehensive services to people living with HIV. I think we should be looking for opportunities to leverage resources from AIDS programs to produce broader health and development outcomes. But what we should not lose is perspective. The effort should be to scale up AIDS programs, not scale down programs. We don’t know exactly how we can make sure that the 10 million people waiting for treatment in Africa will have access. For the majority of people in the world on antiretroviral therapy, decisions about an optimal first-line, second-line, or third-line [treatment regimen] are made based on cost rather than the drug itself. That is why I called for Treatment 2.0—which will explore a new generation of treatment options—to see how we can best provide long-term comprehensive treatment in a cost-effective manner. We need to develop a sustainable approach to HIV treatment.

What was your reaction to the results of the RV144 AIDS vaccine trial?

Well, it was the first time that an HIV vaccine reported some efficacy in human beings. That was very important. It is very important to view this not as a failure, but as a beginning that we can build on to make sure we can have a vaccine one day. In a nutshell, we also need to continue to explore other medical tools which can be used for HIV prevention. If we can combine a vaccine with other tools, such as male circumcision, perhaps a microbicide one day, and pre-exposure prophylaxis (PrEP), we can probably make a difference.

Are you confident that a vaccine for HIV/AIDS will be developed?

I am completely positive on that one. I think that RV144 has been creating a lot of energy and mobilizing the research field. The definitive answer at the end of the road is to find a vaccine. When will we have a vaccine; that is the question. It will be a pity if in the 21st century we fail to have a vaccine.

What will the newly formed high-level commission on HIV prevention do?

What we want is to make a political case for a prevention revolution. The commission will be guided by a scientific advisory panel, and the prospects of an HIV vaccine would be part of the commission’s agenda. We want to know what is happening around HIV incidence—how are we measuring it, are we making progress in driving HIV prevention around the world, and how can we measure progress.

What are your views on ARV-based prevention strategies?

There is an important role for treatment-supported prevention. I am not disagreeing with that. But there are 10 million people who need antiviral treatment today and only around five million receiving it. It is so critical for us to be able to reach the maximum number of people who are in need of treatment today. It should be treatment [for these individuals] before anything else, in my point of view.

What is the current status of the epidemic in Eastern Europe?

While the HIV epidemic has slowed down globally, it is accelerating at an alarming pace in Eastern Europe and Central Asia. We are not seeing anything like it in other regions of the world. There are 1.5 million people living with HIV/AIDS in Eastern Europe and Central Asia. The main cause of the epidemic is injection drug use, and about two-thirds of new diagnoses are occurring in regions where injection drug users have no access to services because they are considered criminals. We need social justice. We can’t stop the epidemic if we don’t have approaches that deal with this population. Universal access will never be achieved if we are basing our strategy on exclusion rather than inclusion.