The WHO Casts a Wider Net

No good deed, it is often said, goes unpunished. But one exception to this otherwise airtight rule may well be a needle-exchange and methadone maintenance program set up recent

ly by Malaysian authorities to reduce HIV transmission among injection drug users (IDUs). It was partly in recognition of that feat that the International AIDS Society (IAS) picked Kuala Lumpur, the capital of the East Asian nation, as the venue for its annual meeting, according to local meeting co-chair Adeeba Kamarulzaman, who is dean of the faculty of medicine at the University of Malaya in Kuala Lumpur. The selection also made Malaysia the first Muslim country—and the first in Asia—to have hosted the conference, which took place from June 30 to July 3.

Kamarulzaman said the needle-exchange program, which she helped establish in 2006 in the face of vociferous opposition from cultural and religious conservatives, has prevented thousands of infections and helped reduce the number of new infections each year among people who use drugs from about 5,000 at the start of the program (most of which were due to IDUs) to just over 1,000 last year.

But that wasn’t quite the focus of the conference. Rather, new treatment guidelines announced by the World Health Organization (WHO) on the opening day of the conference became a major subject of discussion for the remainder of the meeting.

The new guidelines recommend that antiretroviral therapy (ART) be initiated in HIV-infected adults when the CD4+ T-cell count of HIV-infected patients reaches 500—up from the previous threshold of 350. They also recommend that, in some cases, ART should be started whatever the CD4 count happens to be: people infected with HIV who qualify for such aggressive treatment include children under five, pregnant and breastfeeding women, and those who are in a relationship with someone who is not HIV positive. (Unchanged is a previous recommendation that HIV-infected people with active TB disease, or hepatitis B co-infection with severe chronic liver disease should also be treated irrespective of CD4+ T-cell count.)

The guidelines pose a considerable challenge, especially to developing countries, which have been disproportionately hit by HIV. Tsitsi Mutasa-Apollo of the Ministry of Health & Child Welfare in Harare, Zimbabwe, said they raise the number of eligible patients worldwide from 17 million to almost 26 million, compared with just 9.7 million people who were enrolled in ART at the end of 2012.

Another thing that might make implementation of the new guidelines difficult is the stigma associated with HIV infection in many countries and cultures. “People are still afraid to get tested. Stigma and discrimination are still very much alive,” said Andrew Tan, the founder and current elected president of myPlus, a network of HIV-positive Malaysians.

Homosexual sex is illegal in Malaysia, according to Tan, who chose the opening night of the conference to go public as an HIV-positive gay man, but told the audience that he was afraid of the repercussions. “It’s about time we had a law against discrimination in the workplace based on HIV status,” he said, adding that the Malaysian program of mandatory pre-marital HIV testing for Muslim couples is also “ultimately discriminatory.” Such programs, he said, “remind us that systemic stigma and discrimination remain the single greatest obstacle to slowing the spread of HIV.”

Most observers seemed to welcome the new WHO guidelines, but some felt they didn’t go far enough. Bill Bahlman, a long-term treatment advocate and associate producer at Gay USA TV in New York, said that given that the US guidelines already recommend treating all infected people immediately, irrespective of CD4 count, the WHO should have done the same. “I welcome the new treatment guidelines from WHO,” he said, “[but] I think they are unfortunately too conservative. I think the sooner we treat people with HIV, the less new infections we are going to have worldwide.”

But Gottfried Hirnschall, who directs the HIV department at the WHO and co-chaired the guidelines process, said there is currently not enough high quality evidence from randomized trials to recommend treatment at higher cell counts than 500. One such trial, called START, is currently underway: It examines whether net health benefits are different if patients start ART above 500 CD4+ T cells or defer treatment until CD4+ counts have dropped to levels below 350. The WHO also weighed factors such as availability of the drugs and concerns about side effects, Hirnschall said. 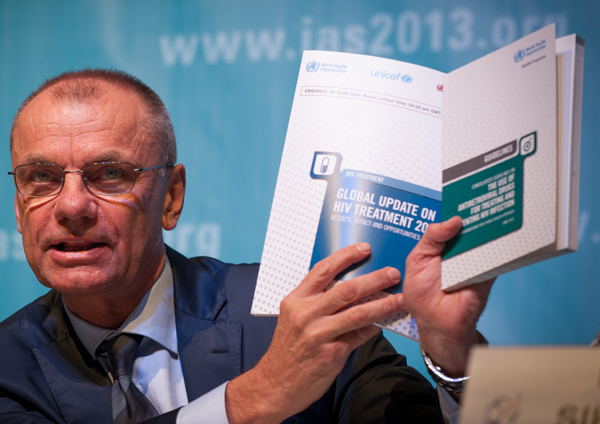 Photo shows Gottfried Hirnschall from the WHO at the Press Conference for the new WHO guidelines. Photo©International AIDS Society/Steve Forrest/Workers' Photos

Still, Hirnschall believes the WHO will eventually move towards recommending treatment above 500, provided there is enough evidence. “My personal view,” he said, “is this is the direction in which we will be going, in which we should be going.”

Meanwhile, evidence for the benefits of early treatment initiation keeps accumulating. This theme pervaded the main IAS meeting and was one focus of a two-day symposium on strategies to cure HIV infection that preceded it. Such strategies largely involve targeting T cells that have HIV DNA integrated into their chromosomes, since they form a viral reservoir that makes HIV infection incurable. A growing body of evidence suggests aggressive treatment helps in that regard. Laurent Hocqueloux, a French researcher, reported that, when followed up after several years of treatment, people who started therapy at T cell counts over 500 had lower levels of integrated HIV DNA in blood cells, and higher CD4+ T-cell counts, than those who started later.

Starting treatment even earlier, during the acute phase of infection, could have even greater benefits. According to early results from a 90-patient French trial called OPTIPRIM, patients who started treatment within three months of infection had a roughly 20-fold reduction in the HIV DNA reservoir in blood cells after one year of treatment. This means that early treatment initiation could bring patients closer to an eradication of viral reservoirs, the most important goal of strategies for curing HIV infection.

Such strategies involve inducing HIV replication in latently infected, resting CD4+ T cells, with the expectation that they will then die as a result of renewed viral replication or become vulnerable to antiretroviral drugs and immune responses. One drug family researchers use to lure the virus out of hiding are HDAC inhibitors. One of these, known as SAHA, has been shown in human trials to stimulate the production of HIV hiding in latently infected T cells. However, this effect was only partial, because it did not result in production of viral particles by these cells.

But Martin Tolstrup of Aarhus University in Denmark reported that a more potent HDAC inhibitor named Panobinostat increased the levels of free HIV RNA in the blood of people on highly active antiretroviral therapy, which suppresses HIV enough to make it undetectable in typical tests. “We believe that we see an increase in the amount of free virus being produced,” Tolstrup said.

“I think [the study] is profoundly important,” said Steven Deeks of University of California, San Francisco, who co-chaired the cure symposium. It is, he said, the first time anyone has shown induction of latently infected cells to make virus in vivo in humans.

Once latently infected cells are reactivated to make virus, the virus production alone might suffice to kill the cells. But that might not be enough, and researchers are examining additional strategies to kill such cells. One involves vaccinating people on ART to boost immune responses targeting HIV. Another involves using modified HIV-specific antibodies—the roughly Y-shaped proteins that can bind to viruses and inactivate them—that carry and deliver a toxic bacterial molecule that kills virus-producing cells.

To kill reactivated cells that produce virus, however, one needs to be able to detect them in the first place. One approach to this problem is to seek out cells that produce a key HIV protein known as the viral Envelope on the surface of infected cells. But that might be easier said than done. Richard Koup of the National Institute of Allergy and Infectious Disease’s Vaccine Research Center, reported that when he isolated a population of CD4+ T cells from individuals not on ART that were rich in cells actively producing HIV, he found it to be very difficult to detect Envelope expression on the surface of these cells.


Control as a kind of cure

The meeting also featured updates on so-called post-treatment controllers, who started treatment during early infection and subsequently controlled the virus after stopping treatment. So far, such cases are only anecdotal, such as the 14 patients of the VISCONTI cohort in France, or the so-called Mississippi baby, who started ART about 30 hours after birth and appears to have been functionally cured.

Still, the excitement was palpable at a session dedicated to such studies. Asier Sáez-Cirión from the Institut Pasteur in Paris, one of the researchers working with the VISCONTI cohort, told the standing-room-only crowd that he is now looking for additional cases to build an international cohort of post-treatment controllers. He asked that anyone aware of such cases share them with his team. Additional examples will make it possible, he said, to better understand the mechanism of post treatment control and to find markers that can predict which patients are likely to show such control.

Others are now also planning to look into the VISCONTI effect. John Frater from the University of Oxford said he is recruiting a new cohort of patients, called HEATHER, who started treatment within a few weeks after infection. “We have identified over 100 potential participants, who we can start to investigate. Maybe we have got some VISCONTI-like patients,” he said.

Hocqueloux’s report on the benefits of early therapy above a CD4+ T-cell count of 500 prompted one audience member at the cure symposium to ask him whether the START trial should be stopped. “My personal opinion,” Hocqueloux responded, “is to treat every patient [who] is not an elite controller. That’s what I do as a clinician every day.”

It remains to be seen when the WHO will take that view.